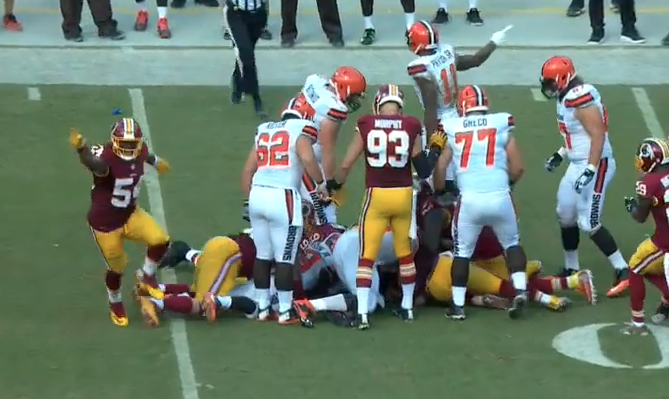 Cleveland – After arriving just a few seconds late to the chaotic scene, a player for the Red Team standing outside the pile of men was absolutely certain that his team recovered the loose ball, despite having no line of sight whatsoever. Although it was difficult for the untrained eye to decipher from a distance, his seemingly wild jumping and pointing was actually a nuanced use of American Sign Language, which experts say translated precisely to: “I believe with a 99% confidence level and a confidence interval of +/- 3% that my team is in control of the football, and as such, must celebrate accordingly.”

Fascinatingly, an opposing player for the White Team displayed equal conviction in his own hypothesis, albeit to an entirely opposite and mutually exclusive end. Despite relying on nearly identical empirical measures of observation, the member of the White Team concluded that the football, in fact, ultimately ought to belong to the White Team. In the end, it was up to the referees to decide the outcome, and after conferencing and discussing potentially conflicting perspectives, they mostly kinda guessed based primarily on what the seniormost white male authority figure proclaimed.