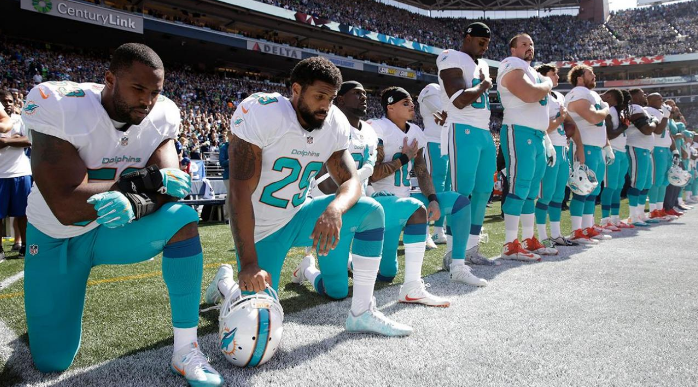 Washington – Several prominent players from teams across the NFL are under fire from the league office after sitting ‘Indian-Style’ during the national anthem to protest the overt and systemic discrimination against people of color in the United States. NFL spokesman Greg McWhiterson was asked about the gesture during a press conference on Monday. “While we encourage the players to speak their mind, sitting in this manner is contrary to the spirit of our national anthem,” McWhiterson noted. “Sitting in this position is offensive to those of Native American ancestry and as a result, the NFL does not encourage such behavior. Unless, of course, this is a sophisticated and elaborate commentary on the ownership of American soil. In which case, touché.”

Although the NFL has yet to  explicitly condemn any of the players involved, they did issue a formal statement illustrating the specific posture requirements for all national anthem protest gestures. When asked whether the NFL planned to force the Washington Redskins to change their offensive name given the league’s stance on this issue, NFL executives refused to comment.