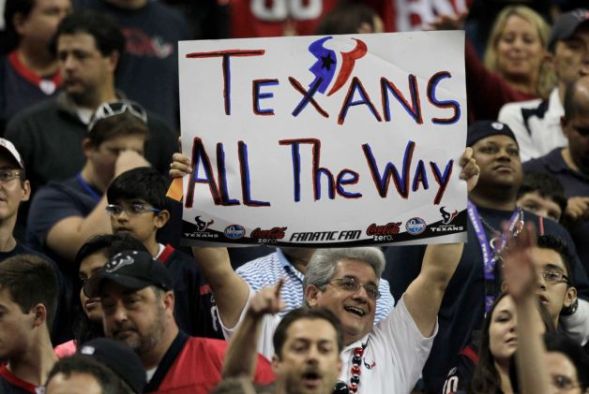 HOUSTON – Emerging into the parking lot at NRG Stadium following the Texans’ game, die-hard fan and mezzanine-level season ticket holder Joe DePalmer turned to his buddies and defended his decision to bring a homemade sign to the game. “Did you see when JJ [Watt] pointed up towards our section after that sack in the second quarter? He definitely saw my sign,” DePalmer exclaimed. Prior to the game, DePalmer debated whether or not it was worth it to drive to Staples, purchase markers and poster-board, and spend 35 minutes creating a sign he would then have to hold throughout the game, but he ultimately decided it was worthwhile, despite his wife’s protests that there is absolutely no reason for a functioning adult to bring a homemade sign to a professional sporting event. “You could see it, like, in the corner of the screen when they showed our section on the Jumbotron after halftime,” DePalmer offered. The Texans won the game on the final play of regulation, however, the outcome was completely unknown to the fans sitting just behind DePalmer until they looked up the final score on their smartphones.